The Panamá Canal is a 48-mile (77 km) ship canal in Panama that connects the Atlantic Ocean (via the Caribbean Sea) to the Pacific Ocean. The canal cuts across the Isthmus of Panama and is a key conduit for international maritime trade. There are locks at each end to lift ships up to Gatun Lake, an artificial lake created to reduce the amount of excavation work required for the canal, 26 metres (85 ft) above sea level. The current locks are 33.5 metres (110 ft) wide.
A third, wider lane of locks is currently under construction and is due to open during 2016.
The layout of the canal as seen by a ship passing from the Atlantic to the Pacific is as follows:

From the formal marking line of the Atlantic Entrance (A), one enters Limón Bay (1), a large natural harbour. The entrance runs 8.7 km (5.4 mi). It provides a deepwater port (Cristóbal), with facilities like multimodal cargo exchange (to and from train) and the Colón Free Trade Zone (a free port).

A 2.0 mi (3.2 km) channel forms the approach to the locks from the Atlantic side. 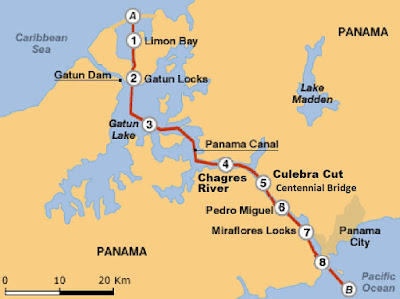 The Gatun locks (2), a three-stage flight of locks 1.9 km (1.2 mi) long, lifts ships to the Gatun Lake level, some 26.5 m (87 ft) above sea level.
Gatun Lake (3), an artificial lake formed by the building of the Gatun Dam, carries vessels 24.2 km (15 mi) across the isthmus. It is the summit canal stretch, fed by the Gatun river and emptied by basic lock operations.
From the lake, the Chagres River (4), a natural waterway enhanced by the damming of Gatun Lake, runs about 8.5 km (5.3 mi). Here the upper Chagres river feeds the high level canal stretch.
The Culebra Cut slices 12.6 km (7.8 mi) through the mountain ridge, crosses the continental divide and passes under the Centennial Bridge for the Pan-American Highway via Panama City (5).
The single-stage Pedro Miguel lock (6), which is 1.4 km (0.87 mi) long, is the first part of the descent with a lift of 9.5 m (31 ft).
The artificial Miraflores Lake, 1.7 km (1.1 mi) long, and 16.5 m (54 ft) above sea level.
The two-stage Miraflores locks (7), is 1.7 km (1.1 mi) long, with a total descent of 16.5 m (54 ft) at mid-tide.
From the Miraflores locks one reaches Balboa harbour, again with multimodal exchange provision (here the railway meets the shipping route again). Nearby is Panama City.
From this harbour an entrance/exit channel leads to the Pacific Ocean at the Gulf of Panama (B), 13.2 km (8.2 mi) from the Miraflores locks, passing under the Bridge of the Americas  for the Arraiján–Panama City (8).